Accueil » Articles » The long march towards the exit of carbon energies

The long march towards the exit of carbon energies

For the time being, most observers of the global energy scene have made a rather mixed assessment of governments’ implementation of the Paris climate agreement reached at the end of the COP 21 in 2015 (keeping in a 1.5-2 ° C range the rise of the average temperature of the atmosphere of the planet between the beginning of the industrial age and the end of this century). It can be seen that, although CO2 emissions had peaked between 2014 and 2016, they had resumed growth in 2017 (+ 1.5%). The observed plateau was certainly due to an increase in electricity production by renewable energy sources but also, and above all, by a marked slowing of China’s economy, particularly its electricity and steel production (J. Tollefson, « Carbon’s future in black and white », Nature, vol. 556, April 26, 2018, www.nature.com ). The rebound in global emissions would be due to China’s stronger economic growth and of its coal consumption in 2017 (+ 3.5% in the first half of the year), while that of India also strongly increased. On the other hand, the United States have significantly reduced their CO2 emissions since 2005 (-13%) by developing its electricity production by renewable energy sources and by replacing coal-fired power plants with gas-fired power stations. They produce natural gas in abundance by exploiting shale gas on a large scale. In any case, most experts doubt that the planet is on the path of an energy transition compatible with the COP 21 objectives.

So what can be done? In a recent report, the International Agency for Renewable Energy (IRENA) urged governments to step up their efforts to exit carbon-based energies and published a roadmap to achieve this goal (IRENA, Global Energy Transformation, a road map to 2050, April 2018, www.irena.org ). According to this report, the carbon budget that we would dispose in order to limit global warming to 2 °C would be exceeded in twenty years from now but, with this in mind, the Irena experts believe that based on the two pillars of the transition, energy efficiency and renewable energy, the UN climate convention signatory countries should be able to accelerate their efforts to limit global warming. Their optimistic vision is based on the record of investments made in the renewable energy sectors. In 2017, the installed electric power in these sectors reached a summit: 137 GW in total, of which 94 GW of solar and 47 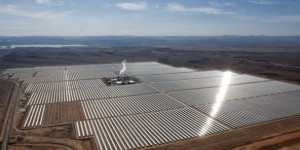 GW of wind energies. This is an increase of 8.3% compared to 2016. It is worth remembering that the availability of these techniques, namely their load factor, is lower than that of conventional one’s (13% for solar energy and 25% for wind energy in France), the availability of solar power plants is obviously higher in Masdar near Abu Dhabi in the United Arab Emirates where the Irena headquarters are located,  cf. picture of Ouarzazate solar plant in Marocco) …). The Irena Roadmap sets very ambitious targets for 2050: a global primary energy mix with two-thirds of renewable energies (15% in 2015), and a doubling of electricity consumption produced at 85% % by renewable techniques, with a strong development of electricity use in transportation. The investment effort in favor of low-carbon energy and energy efficiency will obviously be considerable, it should be one-third higher than the effort required by current policies in order to ensure the energy transition, ie 120 000 billions of dollars (partly offset by savings in the fossil fuel sector), which represents about 2% of annual world GDP. In a very optimistic manner, Irena « anticipates » that all these investments would result in the net creation of 11 million jobs by 2050, particularly in the renewable energy and energy efficiency sectors.

In the panoply of government measures which aim at curbing the use of fossil fuels include the CO2 emission taxation and the removal of subsidies granted by some countries to fossil fuels. These are two topics that are annoying and that Irena does not address in its roadmap. Countries are far from having found an international agreement in these two areas, especially for the former. Many countries subsidize, indeed, the production and especially the consumption of fossil fuels (coal, oil and gas) with the objective of reducing the social cost of energy (by lowering the fuels prices below that of the market). According to the IEA, these global subsidies amounted in 2015 to 325 billion dollars (oil accounting for 44%) but they had fallen sharply (500 billion dollars in 2014) after the fall in the price of the oil barrel. For several years now, many experts, including those of the IEA, have urged governments to phase out these subsidies, believing that they encourage the consumption of CO2 emitting fossil fuels. However, the impact of such a measure on the worldwide reduction of CO2 emissions, supposedly being an efficient, is questioned by a recent study published in the journal Nature (J. Jewell, « Limited emission reductions from fuel subsidy removal in energy-exporting regions « , Nature, vol. 554, 8 February 2018, pp. 229, www.nature.com, see also P.Papon, » Fossil Energy and Climate Grants « , Futuribles, No 424, May-June 2018, www.futuribles.com ). This international study was conducted by fourteen laboratories using five models (with two ranges for oil prices) to determine the impact on CO2 emission of the total elimination of fossil fuel subsidies, and its impact, by 2030, on the evolution of the primary energy mix in the main regions of the plane. It reveals that it would be only very limited, on the one hand on global energy 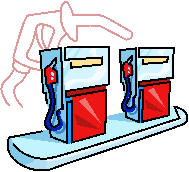 demand (a decrease of 1 to 4% depending on the region), and on the other hand on CO2 emissions (a reduction of 1 to 4% also), except for exporting regions, particularly the Gulf countries (the rise in oil prices on consumer markets would encourage savings). Moreover, it would have a very small impact on the increase of the share of renewable energies in the global energy mix (around 2%). In other words, the taxation and budgetary arms must be wisely used to fight against global warming, even if it would be logical to take into account the global environmental cost of the use of carbon energies, as it is pointed out by Irena in his roadmap.

Irena, like many experts including those of the IPCC, rightly sound the alarm bell about international climate commitments which will be reviewed in December in Katowice in Poland during the Cop 24. We must certainly force the march but also take into account the lessons of history. The historian of energy, Vaclav Smil (author of many books on the history of energy including his remarkable Energy in world history published in 1994, and Energy and civilization, a Bill Gates bedside book …) recalls with force in a recent interview in Science (P.Voosen « The Realist », Science, Vol 359, No. 6382, 23 March 2018, p. 1320, www.sciencemag.org ). The history of energy has been marked by several transitions that have spread over many decades (that of coal began around 1800 and it did not peak until around 1920, the « oil wave » began around 1880 and its famous peak all resources included

, often announced, is barely reached …). V. Smil points out that renewable energies are not very concentrated (they supply less kWh / m2 than other sectors) and that it will be necessary to mobilize large surfaces on the ground to implement them (the offshore wind turbine raises less problem from this point of view …). V. Smil tempers his pessimism by betting on a greater energy efficiency of the economy and hoping for a technical breakthrough, a radical innovation (there have been several in the history of energy) in particular for electricity storage.

The undeniable rise of renewable energies can and must encourage optimism, but we must be aware that the exit of carbon energies will be a « long march » which will only achieve its objective at the cost of a great effort. It must involve: research, innovation and investments, a mobilization of public opinion and a political will capable of supporting the energy transition in all its dimensions on a global scale.