Will large solar power plants have a bright future?

In a recent report on the energy technologies outlook, the IEA (International Energy Agency) has reviewed all the techniques that would achieve the « decarbonization » goal of energy in order to reduce CO2 emissions (IEA, Energy Technology Perspectives 2015, Mobilizing innovation to accelerate action,www.iea.org ). It estimates that the energy intensity should decrease by 2.6% per year until 2050, the current rate (1.1%) being insufficient in order to put the planet on the 2 °C path. It also notes that the sharp and unexpected drop of oil prices, in 2014, gave a wrong signal to renewable energy investments, although the continued growth in renewable energy sectors (wind and solar) is unquestionable. In its new report, the IEA renews a double message which is a recurring theme in recent years: the electricity decarbonization and the distribution of its uses are critical for the energy transition and that requires a great innovation effort with important investments in sectors such as solar cells and batteries for electricity storage. It will be observed that the World Energy Council (bringing together public agencies and private companies in the energy sector, including electricians, from about hundred countries) expresses a quite similar position (see Council World Energy World Energy Trilemma, priority action on climate change and how to balance the trilemma, 2015, www.worldenergy.org ). Can we be more specific and provide a forward-looking vision of the future of renewable sectors, particularly for solar energy? We addressed several times this issue with our blog and stressed in particular the perspectives for new materials for solar cells (organic and more recently inorganic perovskites) which might be an alternative to silicon. Recent publications confirm this breakthrough, the yield of cells with perovskites being, in 2015, just over 20% (see MA Green and T.Bein, « perovskite load cells forward, » Nature Materials, vol. 14, p. 559, June 2015, www.nature.com/naturematerials ). If we limit ourselves to solar photovoltaic plants, can we envisage building large power plants that would contribute significantly to the production of electricity? It is this question that a recent report by an IEA working group attempts to answer (IEA, Energy from the Desert: Very Large Scale PV Power Plants for Shifting to Renewable Energy Future,www.iea-pvps.org ). IEA’s experts are in the proactive perspective with a scenario limiting global warming to 2 ° C: the share of electricity produced from « carbon-free » plants would fall to 10% in 2050 while renewable energy renewable energies would contribute to 65% of the production (the remainder being provided by nuclear and thermal power plants with CO 2 capture and storage). A more aggressive alternate scenario would increase the share of renewables to 79% with solar photovoltaics (16%) in second place behind hydraulics. The rise of the solar sector (4 500 GW of installed power capacity in 2050?) is only possible if we manage to equip the planet with large power plants. This is a serious challenge which can be only met, according to the IEA, by equipping deserts with solar plants. Indeed, solar radiation has a low density (1 kW / m2 at maximum in our latitudes) and its geographical distribution is very variable. This intensity is especially important in desert areas of the world that represent a third of the ground surface:  it would be sufficient, in theory, to equip 8% of the surface of deserts with photovoltaic power plants to deal with today’s global primary energy demand. The Gobi desert, between China and Mongolia (13 million hectares), alone, would provide electricity equivalent to 5 times the world’s primary energy. Based on topographic studies (with satellite data) for six deserts (the Sahara being the most important one), IEA estimates that large solar power could provide half world electricity in 2050. Today, while solar PV energy has been developed in urban and rural areas with small individual installations (panels on roofs and terraces), there are already twenty plants with a power greater than 100 MW (they work, it must be remembered, on average 20% of the time at their pic power) and there are several plants in the United States (one in Arizona and one in California) and China with a capacity of 500 MW. Is the scenario envisaged by the IEA realistic? It is necessary to have a closer look. Operating conditions in the desert are often severe. The environment is difficult: some areas (dunes, mountains) being excluded, sandstorms and extreme temperature fluctuations are a handicap, lack of water can also be annoying (for panel cleaning). Different solutions are proposed for cleaning the solar panels, in particular robots. The remoteness of the production sites in the deserts from consumption areas is another handicap that must be overcome by building power lines 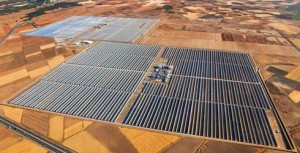 and an interconnected network. The IEA estimates that the cost per kWh installed panels could be divided by a factor of three by 2050 with a production cost in the range of $ 0.05-0.15 / kWh (in 2013 dollar) but with the assumption of a 30 years panel lifetime, which seems being very optimistic. An alternative is envisaged with silicon cells equipped with optical lenses focusing the solar radiation or cells having a plurality of semiconductors (including GaAs-GaInP, GaInAs, GaInAsP junctions whose efficiency reaches 45%) but with a higher cost. Let us not forget, moreover, that the solar concentration (or thermodynamic) plants is an alternative which the IEA does not take into account in its report (but in its current scenarios). While IEA has studied in detail the possibilities of development of the solar energy in China’s deserts with a power grid in the Northeast Asia it is, however, far less eloquent about opportunities to implement large plants on other continents, in particular in Africa. The importance of investments needed for the construction of large power plants is probably a very serious obstacle to the implementation of such scenario for this continent, as small rural central « off-grid » (off-grid) could respond far better to African needs. The Desertec project that German companies wanted to start in North Africa has also backfired (one imagines badly indeed the construction of solar power plants in regions like southern Algeria or Mali …). It is probably difficult to expect a development of high-power solar plants (500-1000 MW) on a large scale in all the desert régions. Il would indeed pose serious logistical problems and, more importantly, the IEA bieng also probably too optimistic on the kWh production cost. However this solution might be viable in certain régions of the United-States where it is already being experienced, and in the Middle-East or South America. Europe is obviously not in a favourable position to implement such a scenario, the only hope to harness solar power plants of greater power being to improve the yields of cells thanks to a possible technical breakthrough.