The French government deciding recently the revival of an industrial policy has labeled thirty-four industrial projects among which six at least have an energy dimension (such as a car 2 litres/100km, batteries with long autonomy, charging stations for battery, biofuels, smart grids , etc.) . . This approach is undoubtedly positive even if it differs from that of yesterday “Colbertism” which, in post-war France, has initiated major technological programs (“Grands programmes “ according to the French terminology) which had led to the emergence of the nuclear and aerospace industries (but lead to the failure of the Plan Calcul for computers). The new projects will indeed be driven by companies.

Most of the energy systems of the future, particularly in the field of renewable energy, will use much more than in the past, a great variety of techniques and therefore the most diverse scientific skills (physics, chemistry, biology, computer science, etc.), so that major technological programs à la française are probably no more suited to energy technologies development (although the question problem remains for nuclear energy). The success of the new French industrial plan relies on the ability to develop innovations that are not yet mature (this is probably the case for all storage devices for electricity, batteries in particular), and thus a significant long term R & D effort, which requires investment, is necessary but the government plan does not breathe any word about it. 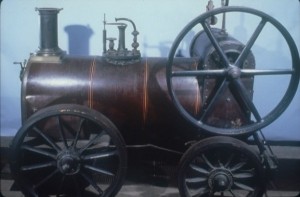 The emergence of these innovations will take time, time being a fundamental factor that is rarely taken into account in France and may be elsewhere in the debate on energy transition. This picture of one of the ancestors  of the agriculture motorized  tractors  (Conservatoire des Arts Métiers Paris, dating from the 1850s, equipped here with a steam engine) illustrates the fact  that improvement of  technical systems through various innovations might take decades.

Some scientific publications in recent months that have not found an echo in the press illustrate this finding. Materials are a central issue for all energy systems, as we have emphasized repeatedly ( it is the same in many areas ) This a fact which has been recognized in particular in the United States, where a new program was launched in 2013 : the  » United-States Materials Genome Initiative  » (see Nature Materials, “Fuelling discovery by sharing « ). Vol. 12, March 2013, p. 173,  www.nature.com/naturematerials ). This program does not aim at translating the techniques of genetics to materials but more systematically at imagining the right combinations of structures (nano or not) and of stoichiometric compositions that will provide interesting properties to materials (for example, the electrical conductivity of the electrodes or electrolyte in a battery), in the same manner that by the genome sequencing one is able to  identify properties of genes and of their combinations thereof opening the possibility to modify their properties. This kind of work requires the collaboration of researchers with complementary skills, furthermore modeling materials would allow testing of new   structures. One must also remark that if the first lithium-ion batteries that are beginning to be used in automobiles have been developed at the laboratory bench in the late 1980s, they still need many various improvements, including for their electrodes. In a recent publication two German laboratories  (in the same issue of Nature Materials , P. Hartmann and al.  » A rechearchable room temperature sodium superoxide ( NaO2 ) battery” , Vol. 12 , March 2013 , p. 228,  www.nature.com/naturematerials ) have reported the development of a new metal-air battery using sodium (instead of lithium) with high energetic intensity and operating at room temperature ( it uses an electrode with air trapped in graphite ). It is too early to know whether this device is a breakthrough that opens a new path, but this paper illustrate the fact that the options for batteries remain wide open.

We will give a third example in a totally different and very old one of the ammonia synthesis field. As we know this synthesis is performed for a century (first industrialization in 1913) by the Haber- Bosch process with a catalyst (an iron compound ) at high temperature ( 350-550 ° C) and high pressure ( 150-350 atmospheres), it allows to break the bonds of nitrogen molecule and its reaction with hydrogen (produced with natural gas today) which is very much energy intensive . It is vital for the production of fertilizers for agriculture (at present a production 140 million tons of ammonia per year around) but it consumes a lot of energy: today between 1% and 2% of world energy. Let recall for History that the German scientist who invented the process early last century, F. Haber (Nobel Prize in Chemistry in 1918), is sometimes regarded as a benefactor of mankind for this discovery, but it also has also developed during the war of 1914 the first chemical weapons (at that time the « famous » ypertite or mustard gas and phosgene) which are in the news today … which did not stop the Nazis dismissing Haber of his institute twenty years later because he was Jewish ….. But in a recent publication two Japanese teams and a Chinese team ( T.Shima et al ,  » Dinitrogen cleavage and hydrogenation by a trinuclear titanium polyhydrid complex » Science, Vol. 34, p.1549 , June 28 , 2013,  www.sciencemag.org ) showed that the reaction of ammonia synthesis might be possible at room temperature and normal pressure with a catalyst which is composed of three atoms of titanium (a trihydride). The researchers did not synthesize ammonia but they broke bonds between nitrogen atoms in the nitrogen molecule and built bonds between them and one hydrogen atom which are the most energy consuming steps of the process. If this process was implemented on an industrial scale with a good yield it would allow the world to achieve significant energy savings. Future development will show whether this is a real breakthrough whose industrial impact may be significant. Again we see that the « traditional » techniques can be revolutionized by more science.

Launching an industrial strategy for energy in France is a measure of common sense (it would still have to be articulated with the 71 innovation clusters, the so called “pôles de compétitivité” which have been created five years ago), but if we wish to prepare for the future it is not enough to proclaim the mobilization for innovation, we have to invest in research (money) and allow time to time (time). This means that we must develop a strategy that allows you to take scientific and technical bets. The Ministry of Research and Higher Education asked  the “Ancre” (National Alliance for the Coordination of Research for Energy which coordinates public energy R&D in France www.allianceenergie.fr ) the task of preparing this strategy. This is the subject of an interesting paper that was released in July (a contribution to the national debate on energy transition in France, the final synthesis, we must regret, gives a little help hat in R & D). In addition to a review of the major research topics, the “Alliance” emphasizes the need to focus on  long term research as it is shown by the recent work we have mentioned. We will come back later to those issues but let us ascertain that for the time being the future is still wide open