World electricity consumption has been growing steadily for many years (19% of the final energy mix in 2017 versus 15% in 2000) and the IEA in its 2018 annual report (IEA, World Energy Outlook 2018, www.iea.org ) proposed a scenario in which electricity demand would grow at an annual rate of 2.1% by 2040. It was considering a strong electric variant of its scenarios, « The future is electric », which provides for a higher rate of electrification of the planet (31% of final energy consumption in 2040) with a large share of renewable energies and in particular the contribution of solar energy. Let’s recall that there are two kinds of plants – the photovoltaic (PV) being main one (solar photons are transformed into electric current in a semiconductor material constituting a solar cell) – the so-called concentrated solar power being the second one (solar radiation, heating a fluid using mirrors produces steam that feeds a turbine), it needs strong sunlight, as it is progressing more slowly, we will be interested only in the PV technique.

The global installed power of grid-connected PV plants has been growing steadily since the turn of the century, as shown by a recent study of the IEA’s solar power market (IEA, Snapshot of Global PV Markets, 2019, www.iea.org , see also IRENA, Renewable energy statistics, 2019, www.resourceirena.irena.org ). It exceeded, for the first time in 2018, the symbolic bar of 500 GW; remember that the sunshine being variable, a solar panel produces electricity with a power which is only a fraction of its nominal power that is to say, in annual average, about 15 % at maximum in France. If the world  power which was installed, has increased, in 2018, by 100 GW (76.4 GW in 2016 and 99 GW in 2017), there was meanwhile a slowdown of investments in the sector last year. China is the undisputed world leader in solar PV with 45 GW installed in 2018 (a cumulative capacity of 176 GW), India is number 2 with 11 GW installed, and the United States in third position with 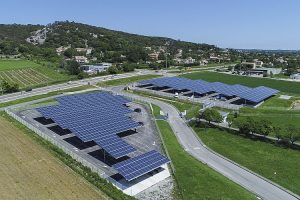 10.6 GW but they are in second position for the cumulative capacity (62 GW) followed closely by Japan with a cumulative power of 56 GW and Germany in fourth position with 45.4 GW, France coming in ninth position with 9 GW. It can be seen that all EU countries increased their installed capacity by only 8.3 GW last year but with a cumulative power of 115 GW. With regard to electricity production, Germany, which is not a country where the Sun is particularly generous, produces 8% of its electricity with the PV plants and roof domestic panels (Greece and Italy around 7,5% each) and France only 2.2%. Finally, we shall note that solar energy accounts for only 3% of world electricity production (wind power 7% and hydraulics 17%).

It is useful to zoom in on the situation in France (with data provided by ADEME, see IEA, PVPS Annual report 2018, 2019). In 2018, the new installed capacity amounted to 862 MW compared to 875 MW in 2017, which represents a slowdown in the dynamics as elsewhere in the world. At the end of 2018, the 9 GW of cumulative power corresponded to 425 000 installations (90% of them with a power of less than 9 kW, but two thirds of the installed capacity correspond to powers greater than 100 kW ( see photo of the Urba solar installation in St Privens in France on a parking lot, picture urba solar / Mr Colin) The electric kWh was sold to the grid (without self-consumption) for small installations (≤ 3 kW) at 18 c € and 8 c € for those with higher power (from 100 to 500 kW).

After a strong growth of investments in renewable sectors since 2010 (55%), they have been compressed over the past two years (IEA, World Energy Investments, 2019) for solar and wind energy, while the capital cost for installed kW fell by three-quarters for solar, 20% for wind and 50% for batteries used for power storage on power plants. It is true that emerging markets, China, India and African countries, where demand for electricity is potentially strong, are growing markets. Advances in production and storage techniques will be vectors for the growth of renewable energies, especially for the solar photovoltaic sector. Storage is a key point and the lowering of production costs depends in part on those of the batteries (the storage for the concentration technique solar plant can be done thermally). For example, in California, the city of Los Angeles, a proposal for a new 400 MW PV plant was under discussion in July 2019 (it is expected to supply 7% of the city’s electricity) at an estimated cost of $ 2 / kWh for production. and 1.3 c $ / kWh for storage with batteries of 800 MW, a less expensive electricity than that of thermal origin (RF Service, « Solar plus batteries is now cheaper than fossil power », Science, vol 365 , pp. 108, 12 July 2019, www.sciencemag.org ). Storage in dams is by far the most widely used technique, but lacking the available sites to build 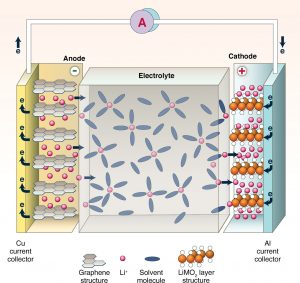 them, particularly in Europe, the lithium-ion battery is the most widely used storage mode for solar power plants (it is also used in electric cars), but its energy density is only slowly increasing (150 Wh / kg). Other options are envisaged as lithium-air, sodium-ion or sodium-sulfur pairs (tested by EDF in La Réunion, it has the disadvantage of operating at high temperature). The hydrogen sector is another option considered for storage, it consists in producing hydrogen with electricity by electrolysis of water, which can then be transformed into methane, partially or totally, and injected into a gas pipeline (the technique known as « power to gas »), or used in a fuel cell to reproduce electricity, for example at a peak hour. A 1 MW « Jupiter 1000 » pilot plant, supported by ADEME, is being tested in Fos-sur-Mer. The energy efficiency (generally less than 50%) and economic profitability of this technique is far from being achieved.

Finally, there is one last question: can we expect progress in the performance of solar cells? The efficiency of silicon cells, the most widely used semiconductor, is today at most 25%, using optical concentrators for solar radiation. In recent years important work has been devoted to new materials, the perovskites, especially in Japan and at EPFL in Lausanne. These organic and halogenated metallic compounds (based on iodine for example with lead and tin) have a yield of 22%, they can be synthesized at low temperature (100 ° C) which would be an advantage but their chemical stability is still problematic. One possible option would be to use a perovskite-silicon tandem, the perovskite absorbing the blue and green light rather efficiently transforms it into infra-red radiation which is very well absorbed by silicon (RF Service « Solar cell built for two looks sweet » , Science, Vol 364, 116, 12 April 2019, www.sciencemag.org ). More generally, the physical processes of producing a cascade of photons from solar radiation in a material, organic in particular, is a track on which physicists work, it is undoubtedly promising but still at the laboratory stage (JM Luther, JC Johnson « An exciting boost for solar cells », Nature, Vol 571, 38, 4 July 2019).

the world, particularly those enjoying a good sunshine like California, the Gulf countries and southern Europe. This is not yet the case for France. The storage of electricity is the technical lock to blow to ensure the flexibility of the production (to face especially peak hour demand). The drop of the batteries cost is undeniably encouraging, but for the time being, storage and solar cells techniques have not yet experienced a real technical breakthrough.