Accueil » Articles » Electricity : the energy of the future ?

Electricity : the energy of the future ?

Prospects for the evolution of global energy demand by 2040 (14 Gtep in 2017), according to the latest IEA report (World Energy Outlook 2018, www.eia.gouv.weo ) are mixed. Indeed, the growth in primary energy demand (with an average annual growth of 3.4% in the world economy), would be 25% in a scenario, « new policies », a softly voluntarist fight against global warming, while in a second proactive scenario, » Sustainable Development « , it would decline slightly. The structure of energy production reveals that: – the share of fossil fuels (81% in 2017) falls sharply in the second scenario (it goes down to 60% with a collapse of the share of coal) but stays at 74% (with a strong growth of gas) in the first one – that one of renewable energies (10% in 2017) is growing strongly

in both scenarios (to 31% in the « sustainable development » scenario). The IEA predicts continued growth in oil demand in the first scenario, with strong growth in shale oil production in the United States (half of production), at least until 2025, as well as shale gas, with OPEC taking over afterwards. The CO2 balance of the two scenarios is very mixed, emissions increasing by 10% in the first one, the objectives of the Paris agreement would be thus out of reach, while they fall by almost half in the second one allowing thus to respect it but without limiting global warming to 1.5 ° C.

The IEA is putting a spotlight on the future of electricity, because if producing and using carbon-free energy is the key objective of the energy transition, it means on the one hand better energy efficiency and, on the other hand, strong growth in « carbon-free » electricity production. The future of energy would it be electric? No doubt because final electricity consumption (19% of the final energy mix in 2017 and 15% in 2000) would grow at an annual rate of 2.1% in the first scenario of the IEA, but at a slower pace in the second one, which assumes better energy efficiency. But the IEA is considering a voluntarist variant of its scenarios, « The future is electric »: the final consumption of energy would be « electrified » at 31%. This increase could be explained, in 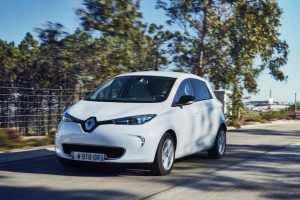 particular, by a strong growth of electric mobility, the fleet of electric cars could reach 950 million units in 2040 in this scenario, with a very strong growth in China, instead of 350 million in its « new policies » scenario (cf. picture  of the  ZOE  Renault electric car). The share of renewable energies (including hydropower) would increase from 25% in 2017 to 41% in 2040 in the « electricity » scenario, while that of the nuclear sector will remain at 10% over the entire period, but with significant growth in China and India. The share of wind power (12%) exceeds that of the solar photovoltaic sector (9%). The share of renewable energies (66%) in the electricity mix would be much higher in the « sustainable development » scenario as well as that of nuclear energy (13%).

Electrification of the world will probably not be a long calm river because, underlines the director of the Agency, Fatih Birol, it is not exempt from risks. It is not certain that we shall achieve a major objective of the UN 2030 Agenda which is to ensure access to modern energy, including electricity, to all inhabitants of the planet in 2030; in fact, 650 million of its inhabitants (mainly in Africa) still do not have electricity in the IEA’s « new policies » scenario, whereas the UN target would be achieved in the  » sustainable development « one. A rise in intermittent renewable energies (wind and solar) is not without risks, because the electrical system must be operational 24 hours a day, especially during peak hours, so it must be flexible to adapt to intermittency: by providing a reserve power in order to ensure the passage of consumption peaks (in the event of unavailability of wind farms for example), frequency regulation, and storage facilities, provided today to 98 % with dams, that will have to be completed with efficient batteries.

The constraints on the demand / production relationship for electricity are already imposing in France. The government was thus led to update the Multiannual Energy Program (EPP), last November, an exercise that is imposed by the law on energy transition voted in 2015. This new program forecasts : – to decrease by 40% fuel consumption in 2030 (instead of the 30% prescribed by law) – to postpone until 2035 the goal of reducing to 50%  the share of nuclear electricity (presently 75%), which implies  closing 14 nuclear 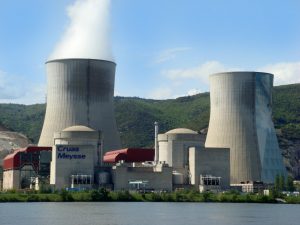 reactors, the activity of coal-fired power plants having to stop before 2022 – the annual financial commitments of the State for the energy transition will go from 5 to 8 billion euros – the amount of the financial aid for the the purchase of electric vehicles will amount to € 6,000 and the energy check intended to help households in precarious situations will increase to € 200. Let us add that following the protest against the increase in the carbon tax on fuels, the government decided to freeze it in 2019.

The government announced with its new programming a strong increase in power generated by renewable energies (see www.edf.enr.com ): they would provide 40% of electricity production in 2030 with an installed capacity of between 102 and 113 GW in 2028 (80 GW of wind, including 5 GW of off-shore, and 40 GW of solar photovoltaic instead of 18 GW in 2017, the hydraulic supplementing the electric mix). This effort is considerable but the whole program raises important questions: the scale of investments for all sectors, the prospects for the kWh production cost. ADEME (Agence de l’environnement et de la maîtrise de l’énergie) has tried to answer it in a new study on France’s electricity mix (Trajectoires d’evolution du mix électrique, 2020-2060, www.ademe.fr , picture EDF Cruas nuclear electric plant). Based on electricity demand evolution scenarios by 2060 (demand mostly decreasing for all its scenarios except for the

one with a « high » demand hypothesis), with a fleet of 16 million electric vehicles in 2035) and seven « trajectories » for electricity (the majority foreseeing a nuclear exit in 2060), the ADEME considers it feasible to reach a cost (excluding taxes except the one dedicated to the support of renewable energy and of households in situation of energy poverty) for the MWh delivered to consumers at around € 90 in 2060 (without including a cost of storing electricity whose impact would be low if the progress of the batteries brought down their cost). The production costs by the renewable energies would be all lower than 80 € / MWh in 2050. It estimates, moreover, the cost of MWh produced by future EPR to about 85 €, or even 70 € (above the market price) if the sector could benefit from a  » series effect « , but in the long run the extra cost of an industrial sector with EPERs would be at minimum about 39 Billions €.

It is observed that these ADEME « forecasts » are similar to those of the IEA, which adjusts the costs of electricity production in order of taking account of additional investments, for storage and extra power to meet peak demand, and also of possible losses of income for the producers, the sale on the market of the electricity produced by the photovoltaic sector at mid-day not being profitable (cf V. ​​Sivaram, Taming the sun, MIT Press, 2018). The MWh adjusted costs produced by the various sectors would be very similar in 2040 in the EU countries (taking into account a carbon tax) but variable from one region to another: from € 84 for power plants to combined cycle gas, 92 € for renewables, 94 € for nuclear and 106 € for coal. These costs foreseen by the IEA for renewable as for nuclear are appreciably higher, but not considerably, than those of the ADEME. On the other hand, estimates made by MIT in its

nuclear energy report (The future of nuclear energy in a carbon-constrained world, www.energy.mit.edu , 2018) are more pessimistic, based on global experience , it is true limited, construction costs of third generation reactors, including the EPR reactor built by EDF in Flamanville in France (cf.picture). These would be at least double that of conventional reactors. The MIT doubts that it is possible to produce a low-cost, completely low-carbon electricity with a nuclear-free mix and it recommends to the countries that would keep the nuclear option open, to make « modular » constructions in series and to consider other generations of safe but less expensive reactors (the thorium sector, for example); the French Physical Society has devoted an interesting dossier to these topics (« Nuclear electricity », Reflets de la of physique, No 60, December 2018, www.sfpnet.fr).

The total cost of a « non-carbon » electrical option (total investments, especially those to extend the life of nuclear reactors to 60 years, and production costs) is still in the « fog » (see P.Papon ,  » L’énergie nucléaire dans le brouillard, » Futuribles Vigie, October 2018, www.futuribles.com ) because it is subject to many hazards. What’s more, the priority given to the

electric car can have a poorly measured impact on electricity demand (destabilizing production with recharging batteries during peak hours!). The cost of the infrastructures needed for fast refills is not really estimated. Finally, if electricity is undoubtedly the « energy of the future », as we have often stressed, the industrial dimension (national and European) of the entire electricity sector is rarely taken into account: what strategies for production chains, storage (including batteries), supply of « critical » metals? What research policy? Many questions remain still unanswered.