Accueil » Articles » Hydrogen: an Energy for the future.…and destined to remain so

Hydrogen: an Energy for the future.…and destined to remain so

Let us first recall that the principle of the hydrogen chain associated with the fuel cell technique has been known for nearly two centuries (a first cell was built in 1839 by a Welshman W. Grove). Today, the debates on the energy transition and on « decarbonised » energies have given it some topicality. The Futurist Jeremy Rifkin, considered, in 2002, in his book, The Hydrogen economy, the new economic revolution (Paris, La Découverte, 2002) that the end of oil was imminent and that hydrogen would substitute oil as an energy vector when it would be exhausted. Let’s start with some physical data. Hydrogen has the advantage of possessing remarkable energy properties which explains its interest: it is the energy vector with the greatest mass density (2.2 times more energy per kg than natural gas, 1kg of hydrogen being equivalent to 3.8 l of gasoline or 2.75 kg). However, it is a light gas, liquefying only at very low temperature (-253 °C) and it is necessary to spend in practice 10-13 kWh/kg to liquefy it. Moreover, on must observe, what is seldom done, that hydrogen flammability range with air is very wide (5 times more than that of natural gas) and with a very low ignition energy (14 times less than methane). It is a dangerous gas and as it is very lightweight it diffuses very easily, especially in metals that it can weaken, its use on a large scale therefore requires important safety rules to store and transport it (a storage in metallic tanks can be dangerous, meanwhile being very light it can dissipate more quickly in case of a leakage). Hydrogen is an industrial 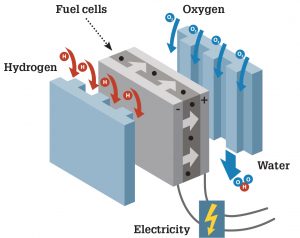 gas (used for the desulphurisation of fuels, in chemistry and electronics) produced essentially (95%) by « Vapo-reforming » of hydrocarbons (mostly natural gas) with water vapour, and marginally by electrolysis of alkaline water with electricity…. which is often produced by thermal power plants, but with a yield which is only 70%.
The Minister of Ecological Transition, Nicolas Hulot presented on June first a « Plan for the deployment of hydrogen for the energy transition ». He added that from the perspective of the energy transition, hydrogen can also become a major issue for the French energy mix, by making possible a large-scale storage of electricity produced with renewable energies, thus making credible a world where the hydrogen vector is gradually replacing fossil and nuclear sources as it would mitigate the intermittency of solar and wind energies. The government programme sets two main objectives for the an hydrogen energy chain : – storing electricity originating from intermittent renewable sources by using hydrogen produced by water electrolysis and which will be then either distributed in a gas network (eventually converted to methane) or used in a fuel cell to produce electricity in an electric vehicle (hydrogen is re combined in the cell with oxygen from the air, a reaction producing electricity and water (cf. picture, Source : Nature, L. Schlapbach, vol. 460, pp. 810, 2009, www.nature.com, Picture, source: Hyundai). The ministry underlines several advantages of this solution : – the rapidity for refuelling (three minutes equivalent to the time needed for refuelling with gasoline (cf. the head image a Hyundai hydrogen car) which provides the car with an autonomy equivalent to that of a thermal engine this argument being valid – a lower vehicle weight because the fuel cell being smaller than a battery, this argument being specious as hydrogen must be stored under high pressure (700 bars) in a composite material tank with a volume of the order of 125 l and a weight not less than 100 kg. Several quantitative objectives are fixed: the perspective of a fleet of 5 000 light commercial vehicles and 200 heavy one’s with 100 charging stations on the territory (one per department!) on the horizon 2023, with the possibility of « greening » the Railways (trains with locomotive equipped with hydrogen fuel cells and electric motors). In order to « green » the hydrogen production the Minister sets a 10% target for the share of hydrogen produced from renewable resources in 2023. EUR 100 million would be mobilized until 2023 for this plan.
In a report published in April 2018, the hydrogen vector in the energy transition (Opinion of the Ademe, April 2018, www.ademe.fr ), the ADEME (an agency in charge of managing public initiatives for the energy transition) had reviewed the potential of the hydrogen sector. The main principles of the government plan are found in this document, namely its two main objectives: electricity storage and electric mobility. ADEME stresses that the hydrogen sector would bring flexibility and optimization solutions to energy networks. It thus envisages a scenario for the horizon 2035 with two third of electricity of renewable origin, allowing to produce 30 TWh of hydrogen per year at a cost less than €5 /kg. It also stresses that hydrogen opens up prospects for its uses in a building, an island or a village for energy storage. The conclusions of ADEME are rather highly balanced but the government plan makes no reference to it, it stresses that accidental risks are often evoked (we alluded to it) and that « the performance of systems associated with hydrogen is in the order of 20 to 30%” instead of more than 80% for battery-related technologies. The use of hydrogen is technically justified, according to ADEME, if it can provide additional service to that of batteries. In other words, the future of the sector seems limited. This is not the point of view expressed in a foresight report devoted to the future of hydrogen in the French 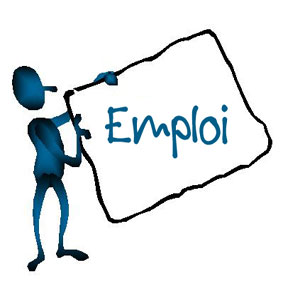 economy, produced by the major industrial partners of the sector with the assistance of CEA (Commissariat aux Energies Alternatives formerly Commissariat à l’Energie Atomique) and AFHYPAC (French Association for hydrogen and fuel cells, http://www.afhypac.org/newsletter/76/l-hydrogene-pourrait-repondre-a-20-des-besoins-en-energie-en-france-en-2050-217). This document sets out very ambitious objectives for the sector : – 400 charging stations in 2030, 200 000 hydrogen vehicles circulating on French roads in 2030 – hydrogen might represent 20% of the energy demand in 2050 (a production equivalent to 220 TWh) – the sector might represent a turnover of 40 billion euros and 150 000 jobs.
The measures announced, by the ministerial plan as well as the optimistic outlook of some industrialists leave skeptical. One starts from the long-term hypothesis that all hydrogen would be produced using electricity produced either by renewable sources or nuclear one’s, which is far from being the case at present. Let us observe that the technical issues are not addressed in the government plan while several technical locks remain, the supporters of the sector probably assuming that « everything is fine Madame la Marquise ». We had mentioned them at length in a note two years ago (cf. Pierre Papon, « hydrogen an energy chain between promises and uncertainties », Futuribles Vigie, No 186, 5 January 2016, www.futuribles.com ). Let us summarize the critical issues :- the behaviour of the electrodes of the fuel cell which for vehicles must use platinum (a rare and costly metal which is true recyclable but at what cost?) – fuel cells operating at high temperature and without platinum being more suitable for stationary infrastructures devoted to electricity storage – the efficiency of electrolytic hydrogen production does not exceed 70% – storage must be ensured under very high pressure with suitable materials, in general composites (a storage in the form of metal hydrides being conceivable for stationary batteries but is no longer mentioned). The ADEME report sums up well the issues without going into details : the global efficiency of a storage system with hydrogen is bad, it does not exceed 30% . Let’s also observe that safety issues are rarely mentioned in those reports, hydrogen being a dangerous gas. It is therefore unrealistic to consider its use in domestic installations as the ADEME seems to envisage, hydrogen use in electricity storage facilities on an open field with wind turbines or a solar power plant posing fewer problems. Safety issues will also arise for hydrogen refuelling service stations (fleets of commercial vehicles can refuel in a better-secured garage cf. front picture: Air Liquide hydrogen service station in Germany, the company operates several stations in the world). Lastly there remains a major issue, which is almost never mentioned: The financial cost of the whole hydrogen chain (from its production to its final use). The cost of hydrogen production will be linked to that of electricity and performance, its use in transport implies the construction of a fuelling station infrastructure throughout the territory; this network being virtually non-existent at present. Installing those station in inhabitations building would probably be excluded for safety reasons. Professor Jacques Percebois, from Paris-Dauphine university, has thus considered in an interview with the newspaper La Croix that « hydrogen appears as a very complicated energy to manage » (La Croix, June 25, 2018). In addition to its technical problems (rechargeable batteries having also their own one’s), the chain might be a heavy economic burden.
While it would offer possibilities for electricity storage in some situations (provided that the global efficiency is being improved), especially on isolated sites, most likely it will not be a solution adapted to the future of mobility. It will indeed be in direct competition with vehicles equipped with electric rechargeable batteries whose performance is improving and at lower costs. At present, only several hundred hydrogen vehicles are circulating in the world. It is true, meanwhile, that Japan displays a great ambition for the hydrogen industry and wants to make the Tokyo Olympics in 2020 a showcase to promote Japanese hydrogen fuel cell technology, Toyota wishing to be the spearhead. Its voluntarism is probably due to the desire to rebalance Japan’s energy mix after the Fukushima accident (where hydrogen explosions had severely damaged some reactors…), by developing renewable energies for the production of electricity. Lastly, one wonders

whether the ministerial objective, in France, of having a fleet of 5000 hydrogen utility vehicles on the horizon 2023 while the market for the electric car with rechargeable battery would probably take off slowly (thirty thousand sales of those vehicles in France or so in 2017) is realistic? There is no point in running several hares at once especially when money (and platinum!) are rare.
In spite of the optimistic proclamations, an attenuated echo to those of J. Rifkin from fifteen years ago, the prospects of the hydrogen industry are probably limited and its economic profitability is very far from being assured. This has already been stressed in a report, published in 2014 by “France stratégie” (Etienne Beeker, « is there a place for hydrogen in the energy transition? », note No. 15, August 2014, http://www.sgtrategie.gouv.fr ). Its future is probably a niche technology. Betting on its large-scale development is undoubtedly a strategic and industrial error.