Electric batteries : a key technique for the energy transition

The electrochemical storage of electricity in batteries has been, for more than a century, the most commonly used technique in thermal and electric vehicles. It is also been experimented with stationary installations to equip photovoltaic solar power plants or wind farms; storage in the form of hydrogen produced by electrolysis of water to feed a fuel cell is a possible alternative but not yet fully developed, the overall efficiency of the storage operation being, presently,  less than 50%. The planned expansion of electric cars fleets has launched a real « race » for electric batteries (see Véronique Lamblin, « The race for electric batteries », Futuribles Vigie, October 16, 2017 www.futuribles.com ) in which the lithium-ion battery is currently the workhorse of manufacturers of electric vehicles but also those of mobile phones and computers (see JM Tarascon, « The batteries are the heart of a connected world », La Recherche, No. 536, p 4, June 2018). Renault equips its most recent Zoe model with a battery which gives it a range of 400 km of autonomy while the Tesla S model has one of 500 km. In electrochemical batteries, lithium-ion for example (consisting of a set of cells), the electricity is stored under chemical form, the electric current, electrons, causes reactions by circulating between the anode and the

cathode of the battery (positively charged lithium ions circulating in opposite directions through an electrolyte). The manufacturers have three objectives: – to increase the energy density of a battery (it is at most 250 Wh / kg currently for the lithium-ion battery) – enlarging its lifetime by supporting a greater number of charging – discharging cycles (700 to 1500 cycles maximum for lithium-ion batteries depending on use conditions) – decreasing its cost (that one of the kWh storable of the lithium-ion battery dropped from $ 1000/kWh in 2010 to about $ 150 / kWh in 2017). They must also take into account the safety conditions (avoiding a fire). It is clear that the batteries electrodes mobilize metals (including lithium and cobalt) whose resources are necessarily limited, the availability of metals, the weight and size of the batteries (those that can give great autonomy to vehicles, 500 km idealy, are still too heavy and too bulky) and their cost are the three key parameters to play with (see K. Turcheniuk et al., « Ten years left to redesign lithium-ion batteries », Nature, vol. 26 July 2018, 467).

Progress has been relatively slow on all these fronts and efforts are still focused on materials and their structures. Lithium ions are intercalated in the electrode structure: graphite in the anodes and metal oxides for the cathodes (usually aluminum, cobalt and nickel oxides, or oxides in which the manganese replaces the aluminum). A battery with a cathode assembly weighing 100 kg will contain 6 to 12 kg of cobalt and 36 to 48 kg of nickel. If in the medium term, 10-20 years, the supply of cobalt does not pose a major problem, it will probably not be the case with a production of electric cars exceeding 10-15 million units / year ; cobalt is a relatively expensive metal (but its price has fallen over the two last years), with limited ore production (about 150,000 tonnes / year), of which 56% the Democratic Republic of Congo contributed to 56% in 2015, with China producing 60% of the metal (see G. Pitron, La guerre des métaux rares, Les liens qui libèrent, 2018, and P. Papon « Strategic Metals for the Ecological Transition », Futuribles No. 425, July-August 2018, p. 116, www.futuribles.com ). Let note that New Caledonia is also producing cobalt associated with its major production of nickel ore.

In the long term it will be necessary to consider a systematic recycling of cobalt from batteries after their use if we do not find an alternative to this metal. Cathodes with iron and lithium phosphates being one possibility, but the batteries are discharging faster. Another one, still at the laboratory stage, would consist in using cathodes made of a mixture of iron fluoride and silicon, their energy density would theoretically be higher than 800 Wh/ kg, but their charging time is still too long and their stability must be improved. The incorporation of silicon in the anodes would greatly increase the storage capacity of the batteries (Tesla uses this type of anode in its batteries). Another perspective would consist in replacing lithium (the lightest of metals, exploited notably from Andean lakes deposits) in a battery by another metal, magnesium, sodium and zinc being possibilities, because in case of an acceleration  of electric car production, lithium reserves would be insufficient; the performances of these batteries are interesting but they have not 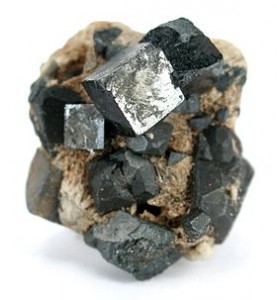 gone beyond the laboratory stage (the number of charge / discharge cycles that they can undergo being a critical point). However, in France the « Electrochemical Battery Storage Network », which includes CNRS, CEA and industrial companies, has developed a sodium-ion battery that could withstand at least 2000 cycles, also its duration would be greater than that of its lithium counterpart, its energy density would be lower but with the advantage of being able to be loaded quickly (CNRS « A start-up pour les batteries de plus en plus rapides  » press release, November 27, 2017). Lithium-air pairs in batteries where one produces and dissociates oxides or lithium peroxides in the battery (one of the electrodes being made of lithium metal), have the interest of being able to « mobilize » two or four electrons per molecule (instead of one only for pure lithium); their energy density would be three to four times that of the lithium-ion battery, giving an electric car an autonomy comparable to that of gasoline. Meanwhile this system has the disadvantage of operating at 150 ° C ( the use of metallic lithium also poses safety problems), the work is, again, at the R & D stage as well as for the zinc-air pairs (S. Feng et al., « Hot lithium-oxygen batteries charge ahead », Science, 361, p.758, 24 August 2018, www.sciencemag.org ).

The life of lithium-ion batteries is often limited by the formation of dendrites on the anode (a metal filament that forms on its surface) which, by growing up, can reach the cathode and cause a short circuit which damages and decreases its life, or even starts a fire. Researchers at the Rensselaer Polytechnic Institute in the United States have found a parade of intermittently sending electrical impulses that, by heating the dendrites, melt and destroy them; they have demonstrated the effectiveness of this technique on a lithium-sulfur battery, it remains to be applied to other batteries (A. Mukhopadhyay et al., « Li metal battery, heal thyself », Science, vol 359, No. 6383, 30 March 2018, p. 1463, www.sciencemag.org ).

The lithium-sulfur pair, another option, seems to have achieved a major breakthrough, announced recently by a British start-up Oxis Energy, which opened a small pilot plant in Abingdon (R.F. Service, « Lithium-sulfur batteries poised for leap » , Science, Vol 359, No 6380, March 2018, p.1080, www.sciencemag.org ). The basic idea for this battery consist in replacing in the cathode of the classical lithium-ion battery, metals that trap lithium ions by sulfur which is light and inexpensive (avoiding thus  using cobalt a « critical » metal); ipso facto the battery is lightened and with an energy density that would be twice that of the lithium-ion battery. However, this battery can only withstand a hundred cycles which is a serious handicap, and would limit its use to the equipment of drones and underwater vehicles, or even military devices (it is tested by Airbus on the very high altitude Zephir UAV). Sulfur has the serious disadvantage of being a poor conductor of electricity, a condition which does not facilitate the transfer of electrons to lithium ions in the cathode. By immersing sulfur in graphite (or layers of graphene) which is an excellent conductor and by coating the cathode in a polymer 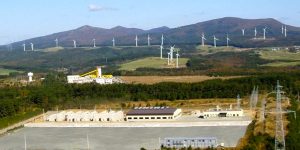 film to prevent the migration of polysulfides that poison the anode, one could achieve an energy density of 500 Wh / kg. If its durability is increased, it would be a serious competitor for the lithium-ion battery. The sodium-sulfur system is alternative option, being studied since a long time and currently tested for stationary batteries on solar or wind power plant sites (notably by EDF on Reunion Island and with a 1 MW battery and in Japan, cf. picture). The electrodes consist of molten sodium and sulfur which are separated by an aluminia ceramic is probably not a major drawback for an installation of this type on an isolated site. The hydrogen battery operating at very high temperatures (600-1000°C) with materials that are solid oxides, especially nickel, and that does not require the use of platinum as a catalyst, is also an open option for stationary storage.

The development of batteries and the development of new systems (lithium-free) constitute a major scientific and industrial challenge. A long-term R & D effort is essential, it is piloted in France by the « Electrochemical Battery Storage

Network ». The lithium-ion battery which is perfectible can certainly hold the lead for several years and if it is premature to announce breakthroughs, recent progress shows that the games are still open in the laboratories. An industrial strategy also implies a mining policy for supplying « critical » metals that France, like Europe, but unlike China, has forgotten, this deficiency is a serious handicap for the future of the battery industry.